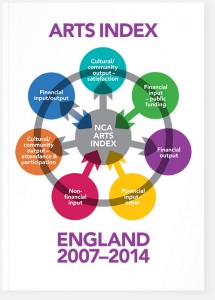 The National Campaign for the Arts has published a sobering report, ‘Arts Index: England 2007-2014’. (Slightly confusingly also referred to as Arts Index 2015, but I’ll forgive them.) This paints a picture of an arts sector seemingly on the cusp. Whether it’s on the cusp of deformation or disaster, transformation or simply more determined, sweaty inventive hard work only time will tell.

The Index takes 20 indicators and tracks them, where possible, between 2007 and 2014. The indicators of treasury and local authority funding are shocking, but tell us what we know: government decisions have led to drastic reductions in public funding. Other indicators show decreases in business and individual giving – at least where recent data is available. (No congratulations to whatever bright sparks thought it would be a good idea if Arts & Business stopped tracking business giving just when we need to know more than ever.) Lottery funding is higher, of course, as the government never ceases to remind us.

Two things seem to be enabling the arts – as a whole – to keep a tenuous grip on the ‘consolidation’ phase. Firstly, earned income has tended to increase over the period, alongside numbers of people participating steady and their sense of the quality of the work improving. This is no small achievement. Secondly, trusts and foundations have stepped up to the plate and become even more important to the income mix. The indicators also suggest a trend toward greater economic contribution from the arts.

The overall indicator has actually risen since 2007. But one must ask at what cost. It is not the Index’s role necessarily, but we need, for instance, to assess the impact on inclusion/exclusion of the sector’s successful response to the ‘business imperative’ to earn more income. Other questions around those ‘areas of success’ would include how much longer earned income and trusts and foundations can continue to increase, and what damage there will be to ‘the ecosystem’ from the loss of organisations that can’t match the overall trend, for whatever reason.

The tone of the Index can be a bit doomy, which is understandable given its purpose. I’m not arguing for an equally advocacy-driven but ‘positive’ version – though this could be used as such. ‘Look how strong the arts are overall despite the cuts. Earning more, fundraising more, reaching more people.’ Those messages can, of course, be used from various directions. The ‘Index’ could help us look over the horizon for what might be coming. With this in mind, the most worrying indicator is the dip in reserves in recent years, after a period where they developed. This may be a sign of investment, or – more likely – of ends not quite meeting.