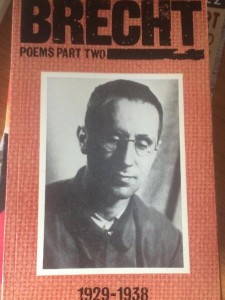 The other day, taking a brief break from the exciting projects I’m currently working on, I pulled BRECHT POEMS PART TWO from the poetry shelves that watch me work. These are mainly ‘poems of the Crisis Years’, perhaps it was that which made me pick this book, rather than the adjacent Kamau Brathwaite, Joseph Brodsky or indeed BRECHT POEMS PART THREE.

I was drawn into a poem called ‘The Doubter’, which struck me as eminently useful for all consultants, researchers, artists, managers, leaders, campaigners, directors, producers, strategists, management teams, politicians, voters, representatives, writers and makers of arguments and positions of any other description. It has resonance with Beckett’s famous and useful ‘Fail again. Fail better.’ But it seems to resist the glamour that sometimes attaches to that, in a way I like.

The questions are specific and pointed, and people I facilitate or coach may well hear some of them in the future. They also reminded me of those in Kenneth Koch’s The Art of Poetry, which are very useful for writers specifically. (And enjoyable for all readers.)

Brecht’s poem seemed to sum up a lot of principles I hold to in writing almost anything. The importance of being clear, but not wiping out ambiguity, subtlety, even contradiction. Sense of self and audience. Properly acknowledging what is actually happening, like it or not, before working to change it if need be. (That’s what I take from ‘Do you accept all that develops?’, rather than acquiescence.) Not being swayed by how well something is phrased. And turning to action, the ‘so what?’ as I might say in facilitator mode.

I share this here in case useful to others, and as BB is long gone. I would balance it with a line from Bruce Springsteen: ‘God have mercy on the man who doubts what he’s sure of’ – also worth reminding oneself of, deist or not. But next time you feel you’ve cracked something, pause for a moment of doubt.

Whenever we seemed
To have found the answer to a question
One of us united the string of the old rolled-up
Chinese scroll on the wall, so that it fell down and
Revealed to us the man on the bench who
Doubted so much.

I, he said to us
Am the doubter. I am doubtful whether
The work was well done that devoured your days.
Whether what you said would still have value for anyone if it were less well said.
Whether you said it well but perhaps
Were not convinced of the truth of what you said.
Whether it is not ambiguous; each possible misunderstanding
Is your responsibility. Or it can be unambiguous
And take the contradictions out of things; is it too unambiguous?
If so, what you say is useless. Your thing has no life in it.
Are you truly in the stream of happening? Do you accept
All that develops? Are you developing? Who are you? To whom
Do you speak? Who finds what you say useful? And, by the way:
Is it sobering? Can it be read in the morning?
Is it also linked to what is already there? Are the sentences that were
Spoken before you made use of, or at least refuted? Is everything verifiable?
By experience? By which one? But above all
Always above all else: how does one act
If one believes what you say? Above all: how does one act?

Reflectively, curiously, we studied the doubting
Blue man on the scroll, looked at each other and
Made a fresh start.