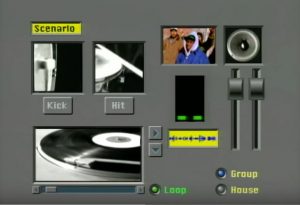 It is 7 years today since my first blog under the Thinking Practice banner. I’m not going to talk right now about the time I’ve had since, but thank everyone I’ve worked with for keeping me useful, interested, learning and paid. The adaptive cycle has intermittently been on spin, but put it like this: my lack of a job title has now lasted longer than any of my ‘proper job’ titles and that’s grand by me.

I want, instead, to look back to a blog I shared that founding week, which shared some scenario thinking and explained my focus on helping cultural organisations become more adaptive and more resilient. Seven years on, which bits ring true? And what didn’t I imagine well enough?

I wrote the scenarios below in March 2010, in the run-up to the election that led to the coalition government. Arts Council England was downsizing fairly dramatically as a result of cuts by the late Brown Labour government, and had had to pass cuts on. (I had just left during the resulting restructure.) It has subsequently had to deal with even deeper cuts in grant-in-aid funds and staffing handed down by the coalition government. I used two parameters to shape the scenarios: sustained or drastically fewer resources, and whether the sector was more outward or more inward-looking. As set out in the original blog, the point for planning is not get close to ‘right’ but to use the four scenarios to inform strategy.

I can see evidence for things described in all four boxes – a sign, perhaps, of weakness in the original scenarios. I had a look through ACE annual reports and reports on their funded portfolio to check my sense of things against the trends in their data. (I noticed whilst doing so that they have not published a report on the most recent NPO returns, although the statutory data is published.) I could reflect at much greater length if not careful, but here are four thoughts on those scenarios as they are reflected in England primarily.

It is clear that although national funding to culture in England via ACE has largely been sustained by increases in lottery funds to mitigate reductions in grant in aid, local authority funding has declined massively. This is causing both visible and less visible damage. From closing museums and libraries to the loss of key posts and people, one can see loss as in the two left-hand scenarios. However, if one looks at ACE’s portfolio (admittedly a subsection of the sector), one can see that their overall income has increased substantially – by a third, despite the portfolio being smaller in number. (See table below.) Both earned income and contributed income have increased dramatically. Even the collective surplus appears to have increased, although this runs counter to what I hear many organisations are facing in terms of difficulties maintaining their reserves. (The latest ACE figures make it difficult to track patterns of reserves amongst the NPO portfolio.) 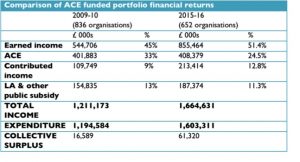 This is most likely a combination of canny commercialisation and pricing (eg ‘Pay What You Think’ experiments leading to increased income), improvements in retail strategies, innovative programme charging for some things that used to be free-at-point of use and being better at fundraising. The pressure on trusts and foundations, as well as ‘philanthropy’, is something of a cause for concern in the future.

The table below suggest that attendances are increasing, although there has also been recent evidence about museums that runs counter to this. There may, however, be side-effects to this such as narrowing or distortion of programming, and changes to relationships with audiences, artists and smaller partners.

That some have found new resources does not mean this has been possible for all. There may also be some ‘natural selection’ effect reflected in the overall increased financial performance of the ACE-funded portfolio. The portfolio is smaller by 2016 than it was in 2010. Perhaps it is now more consistent, stronger, more skilled at generating resources etc, or perhaps it is different in its overall make up – with more larger organisations, fewer fragile experiments.

Or perhaps organisations less able to consistently raise funds from users or trusts are more likely to close. I have a general sense from what I observe that although partnerships and collaborations are common, and delivering some great work, some organisations are having to prioritise their core activity, even within continuing collaboration. If a gallery space has to ‘earn its keep’ through tickets or fundraising that feeds core, it is harder to share it with another organisation, for instance.

Change is present in all four of the scenarios. I think we are seeing it, although it is, as William Gibson said about the future, unevenly distributed. Internationalism has remained high on many agendas, including those of funders. Despite the way the working culture of the cultural sector continues to disable many people, programmes like Unlimited have made big breakthroughs in enabling and showcasing the breadth of talent around. Creative People and Places shows that working with potential audiences and participants rather than on them reaps rewards. The ‘everyday creativity’ of things like 64M Artists and Fun Palaces also seems ot reflect the changing the world scenario. Leadership development, despite some lamented losses like Mission Models Money, has actually diversified around its main vehicle of Clore, with various subject or location-specific such as Museums and Resilient Leadership and ASTONish in Birmingham.

In areas relating to finance, the take up of loan funding has begun, but slowly, with things like the Arts Impact Fund, and tax credit schemes have been introduced by government for some kinds of theatre, orchestra and museums activity. (Although, let’s not forget, tax not raised is tax not spent…)

Implicit in my scenarios was that a growing inequality was likely, especially in a more self-reflective sector. The work being done around, for example, inequality in the acting profession suggests this is the case. For all the policy talk of diversification, actual choices often mean retrenchment. Since 2010 we have also seen the imbalances in funding for London and the rest of England put under the spotlight by Messrs Gordon, Powell and Stark. The extent to which this will help tip ACE’s portfolio from stability to innovation or vice versa will be seen later this year.

Two big shifts strike me as missing or unforeseen. Firstly we see the embattlement of arts education, which is really the result neither of shrinking resources nor of an uncommitted sector, but of ideologically driven changes to schools. (These do involve shockingly shrunken funds, but it’s not that primarily attacking arts in schools.) This feels like a really fundamental issue for the next few years. The extent to which arts are driven out of schools might be a useful axis for more scenario thinking. It’s a horrible thought, but what should the sector do if it despite the odd victorious battle, music or drama effectively drop from the state school curriculum?

And secondly, we have the exercise in self-denial, even self-harm, that is Brexit and the (in my view) broken politics that led to it. That we would face the next decades in such a small and small-minded country baffles and scares me. It is a cultural phenomenon, and will have an impact on culture. The extent to which the sector’s response is focussed on what it and its audiences know and love or, conversely, it sets the controls for the new, the unknown, the foreign, may be another critical axis.

Overall one could argue the scenarios described on the right hand side of the quadrant are most visible. This was certainly how The Will of the People expressed itself in a highly unscientific Twitter poll I conducted. (60% for Changing the World, 40% for Thriving by Surviving, but given only five votes were cast, there are not enough pinches of salt available…)

I will admit to being a little surprised to find myself mainly focusing on the right hand side of the quadrant too. I should stress, though, I don’t see this as simply more positive: there are huge challenges, dangers and losses happening, and some people – maybe especially artists, though not exclusively – bearing the brunt of pressures on the sector. I have a sense of ‘Few but Roses’ pushing through the picture, with more closures mixed with innovation and concentration of resources in particular places. A greater emphasis on flagship festivals and institutions has been exacerbated by a ‘Talk to the Treasury’ place-based funding strategy, leading to major investments that look, well, a bit patchwork but shape how people are working. (Maybe it should be ‘Few but Cacti’ though…)

Hence, on the one hand the galvanising-but-perhaps-distorting effect of competitions and bids from City of Culture to Great Places etc, and on the other something of a new wave of capital development or mega-projects. That these often overlap geographically – with Manchester being the biggest example of a pattern also found very differently in Sunderland, say – is a sign of strength and a source of optimism but also perhaps of a continuing challenge given the divisive nature of both the arts education and Brexit phenomena.

I have missed lots out, I know. And, of course, I might be miles away from your own take and experience. Let me know what you think.