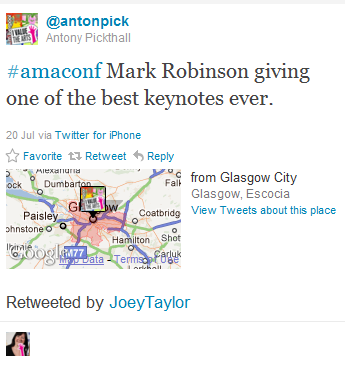 The picture at the top of this page is one of our favourites, for obvious reasons. Mark Robinson is an accomplished public speaker who has given keynotes, panel presentations and workshops at many conferences.  He has spoken at events in Bulgaria, Romania, South Africa, Canada, Australia, Ireland as well as across the UK, for organisations ranging from &Co, Audiences North East, British Council to Opera Canada and Cultural Trends.

Here’s what Christina Loweon from Opera.ca said after the event:

Thank you so very much for your contribution to the Colloquium. Many months ago when I emailed you to see if you were available and you were, I literally lept with joy as I had a feeling that snagging a keynote from you, would ensure that I had the Colloquium “in the bag” so to speak – and I was right. I am still hearing from people about how much they appreciated your insights and this framework to help think through change.The twitter feed at #boc2011 was looking all lit up for while too.

Mark is especially interested in conferences and events where he can be active in facilitating or participating in discussion, debate and ‘live thinking’, as well as simply presenting. He likes to challenge, stimulate, inform and provoke and give people something to think about. This has on one occasion led to him being called ‘a bit metaphor-tastic’, but he took that as a compliment.

Mark is also interested in documenting conferences for people, in a creative and informed way. He created a conference report in verse form for Tyneside Cinema, ‘live’ on the day and then in a publication, and has also been tweeter-in-residence for Creative Case North and produced the 2016 Creative People & Places conference report.

Some events Mark has taken part in:

Mark has also delivered workshops at conferences and as stand-alone training events.