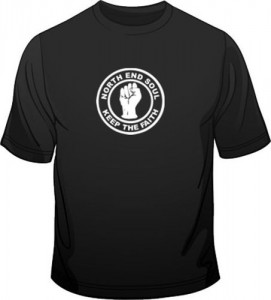 Mission Models Money have just published The Art of Life, a provocation by Tim Kasser, followed by responses from a number of perspectives by writers including Eleanora Belfiore, Ellie Harrison, Donald Smith, Dan Russell and others. The paper as a whole seeks to start to answer the big, hairy and audacious question Shelagh Wright poses in the introduction: ‘Can we transition the values of our society and economy within a generation?’

After Mr Sarcasm has muttered ‘Not if we use ‘transition’ as a verb very often, we can’t,’ a number of more helpful and positive responses arise, which I’ve been trying to find ways into for a couple of weeks. Two of them are mentioned in the title: football and Northern Soul, but I’ll come to these in a moment.

Tim Kasser’s provocation interestingly describes how research indicates our values can be shaped by cultural activity, and how certain values affect behaviour and well-being, and how ‘intrinsic’ values such as self-acceptance, affiliation and community can be suppressed by extrinsic ones such as financial success, popularity and conformity, and vice versa. This suggests to him that culture may make people more likely to adopt or adapt to values that promote greater well-being and care for each other and the planet. As he puts it:

‘If we accept the sensible proposition that engagement in arts and culture activates values such as “curiosity” and “creativity,” then the implication from research on the value circumplex would be that the intrinsic portion of the human motivational system could be encouraged and strengthened, while the extrinsic portion could be suppressed, as a result of participating in arts and cultural activities…. After all, arts and cultural activity are realms of human life in which people frequently report strong feelings of flow and engagement, and in which people often engage for the solely intrinsic reasons of self-expression, creativity, and exploration.’

Throughout Kasser’s essay, and the introduction, which gives some great examples of projects in this area, I found myself wanting to insert words like ‘some’ and ‘one’ as in ‘some cultural activities do this that or the other’ and ‘They are one frame through which we construct the stories that we tell ourselves and others about what is important’ rather than ‘the’. (This is something I notice I want to do more and more often actually. I’m not saying Universalism is wrong in all cases, beyond never buying the Sun or the Daily Mail, but…)

This suggests the major challenge I’d make to the many useful points Kasser makes about the research into how values are shaped. Some but not all culture works like this: some reinforces conformity and can be used to seek status. Some arts and culture can be bad for your heath (note the high depression and suicide rates in great writers, or, more anecdotally, my friend who was depressed for weeks after we took her to see the Unthanks!) and probably for your values too. Importantly, arts and culture are not the only things to affect people’s values, an impression Kasser is at risk of giving at times.

The artists who respond to Kasser reflect this, which is why this is such an interesting publication. From what I know of their work, Ellie Harrison and Mike van Graan, in their different ways, refute a description of artists engaging primarily for reasons of self-expression, creativity and exploration. Harrison starts her response with the great line ‘You may be pleased to hear that as well as being an ‘artist’ – a supposed creator of the ‘arts and culture’ in question – I am also a human being.’ Her reflections on the pressures on young visual artists to ‘make it’ suggest the challenges of shaping planet-friendly values via such conflicted material as culture.

Mike van Graan, from the perspective of a South African activist, arts developer and playwright, is most challenging to the emphasis on values as a way into the great transition:

‘While values may be shared within and across cultural, class, racial, religious and other divides, and individuals may be prepared to recognise and stand together on the basis of such values within their particular “group”, more profound divisions of class, culture, “race” and religion often deny them the ability to recognise these with or in those who are less like them. Before sharing values, a more fundamental challenge may simply be to have the “other” recognised as a human being, as an equal….

Before it seeks to explore or share crucial values, the arts – accessible mainly to the moneyed classes of the world – perhaps have a more fundamental role to play: to humanise (for the rich and the powerful) the many millions who exist on the underside of history, who “are born equal in dignity and rights” (at least theoretically) to the rich and the powerful. If only this one “value” were to register and change the way people think, act and pursue their own interests, then the world would be a different place.’

There are other responses, and there is much I agree with throughout this paper: arts and culture does have a role to play, but needs, for me, to sit much more in the ordinary life of people if it is to move from the margins of really affecting societal values for the majority – which is what I take to be necessary for that transition.

My fear of an emphasis entirely on arts and culture is it cuts out many people, and multiplies the difficulty. This is not to say we shouldn’t address these issues through art, or that art is not most powerful what it reaches out to new people with new ideas and stories. Changing the dominant values of our society to something more people- and planet-friendly will take not one but many approaches. People’s varied experiences of family and local life, or, say, food and its production, powerfully affect their values, behaviours and impact on others and the planet.

Thinking about my own broadly cultural life, I was reminded of the famous quote from Albert Camus: ‘Everything I know about morality and the obligations of men, I owe it to football.’ I know some of the truth of that, both as fan (not so much ‘fail better’, as ‘just fail’) and my own weekly 5-aside (ditto). The obligations to teammates, work ethic, creativity even, inform how I work and live, absolutely. To some colleagues in the arts and culture, that will sound daft or grandiose. So be it. My point is not, of course, that we should all play 5-aside or support Preston North End, but that values get shaped, or not, by many different types of experience.

I was also reminded this week of how arts and culture works by a fantastic BBC Culture Show on Wigan Casino and Northern Soul last week by Paul Mason, author of the excellent book Why It’s Kicking Off Everywhere and exile from Leigh. It’s come down off I-player, but if you can, for now at least, see it on YouTube. It captures the absolutely life-changing passion art can generate, and how deep these things can go – as deep as the muscle memory that helps Mason spin, if not quite backflip, in the film. It’s a lovely film, music creating what Ellie Harrison describes as ‘the time and space beyond the realms of the market’, despite all the revivals.

Has loving this music made for a cultural or value shift, though, in otherwise ‘ordinary’ people? It has definitely generated community for people, feelings of affiliation and self-acceptance. There is an embracing of diversity, and the humanizing that Mike van Graan talks about, as well as – in the dancing – plenty of flow and engagement! It sets people outside of the norm. So maybe the answer is yes, although it is also weirdly monetized, with the value of certain records carefully noted. But as those records are the ones originally seen as flops, forgotten and left to warp in warehouses, maybe Northern Soul is actually intrinsically a very green cultural phenomenon? Maybe that’s pushing it.

But as MMM and Northern Soul fans alike know, you got to keep on pushing. The Art of Life is an important contribution to a vital conversation.