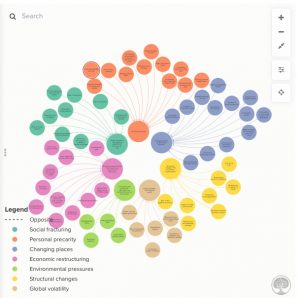 In my last blog I shared the Panic! Report, which gave some data-perspective to the debate about diversity and social background in the arts. Debbie Geraghty gives another perspective on that, one which really resonated for me as I have been thinking how we better reflect the range of backgrounds and experiences of people in the sector, some of which are not visible, some of which are subtly erased as people make their way. As she says, ‘Do those numerous well-meaning articles that remind us we don’t exist across the arts sector recognise what it feels like to hear that for the umpteenth time? As if we didn’t already know. How am I and so many others expected to feel? It’s almost like a child whose parents talk about them among friends within earshot as if they aren’t there.’ Debbie Geraghty argues that both the numbers approach and the success stories of renewed focus on what she calls – I’m not sure how ironically or not, how exclusively or otherwise – ‘us diversity lot’ can elide the painful experiences those tasked with diversifying the sector carry.

Demos have set out on The Optimism Project, ‘driven by a determination not to despair’. I’d quite like to not despair too – one reason I now listen to Radio 3 in the bathroom rather than the Today programme and have long avoided Question Time. I’m not sure the first report quite has me feeling more optimistic, if anything it has me thinking on the smallness of potential victories, but it is interesting reading. People feel more optimistic the closer to home you get. More surprisingly, people tend to feel very similarly whatever their age, gender or background. And looking for reasons to be cheerful, we have free healthcare and our culture and heritage. The way forward is suggested as being rooted in the local, identity and pride and investment in services we care about, with more collaboration and dialogue. Some of these could be rather double-edged, it seems to me, and may not avoid the division that damages many people’s optimism.

Tangentially, the recent ‘Digital Attitudes Report’ from doteveryone connects to some of the themes in The Optimism Project, through unease around transparency, accountability and shared standards. One of the recommendations is investment in new forms of public engagement and education. This is to do with technology and digital understanding in this case, but has very much the same impulse as Demos idea of ‘an age of relationships’.

The independent inquiry into the future of civil society published its Interim Report last month. It’s a big and fascinating report, which amongst other things includes a really handy summary of the main trends ‘shaping the future’, which would be a handy starting point for anyone considering a PESTLE for an organisation working in the civic space. (There’s also an interactive version here.)

The main themes of the report also echo much of what’s been referred to elsewhere in this blog: power and powerlessness, the centrality of ‘lived citizenship’ in local places, the fragmentation of relationships and the need to rebuild them, and the reimagining of work and purpose. The Inquiry is not at answer stage as yet, but quotes Raymond Williams to lead into ideas of creating ‘commons’ that enable a shift from participation to collective action and decision-making: ‘There are ideas, and ways of thinking, with the seeds of life in them, and there are others, perhaps deep in our minds, with the seeds of a general death. Our measure of success in recognising these kinds, and in naming them making possible their common recognition, may literally be the measure of our future.’

I have quoted from this essay by Vaclav Havel before, but was inspired to read it again by the selection above. I share it here more as a note to self than as advice to others.

‘Hope in this deep and powerful sense is not the same as joy when things are going well, or willingness to invest in enterprises that are obviously headed for early success, but rather an ability to work for something to succeed. Hope is definitely not the same thing as optimism. It’s not the conviction that something will turn out well, but the certainty that something makes sense, regardless of how it turns out. It is this hope, above all, that gives us strength to live and to continually try new things, even in conditions that seem as hopeless as ours do, here and now. In the face of this absurdity, life is too precious a thing to permit its devaluation by living pointlessly, emptily, without meaning, without love, and, finally, without hope.’