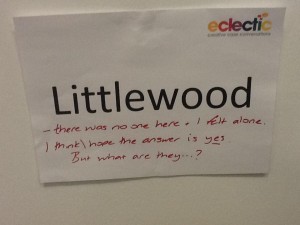 Recently I chaired three ‘creative conversations’ about the ‘creative case for diversity’, organised under the banner of ‘Eclectic’ by BALTIC, Gem Arts and Zendeh and supported by the promulgators of the creative case, Arts Council England. These brought people together to hear some thoughtful and provoking speakers, and then to have open space style conversations around topics of their own choosing. The idea was that these events were very much ‘sector-led’, rather than being driven by Arts Council, and were about creativity and the creative case rather than nuts and bolts equality plan issues.

It felt as if this idea was welcomed by the people who attended – although I guess you have to wonder whether it is by the people who didn’t attend. Maybe there are some NPOs and others who think the creative case doesn’t apply to them, and they are fine ‘doing what they do’ with who they do it. Maybe there are some who think they’ve heard it before and a fundamental opening up of our stages, pages, streets and galleries is unlikely. I don’t know. But as one of the principles of Open Space has it, ‘the people who come are the right people’ – and certainly those who came, over 130 people at the three events, were happy to get stuck into some meaty discussions.

I won’t attempt to replay any of those here, but point you to poet Kate Fox’s instant, on the spot, poetic reporting which you can find on the Zendeh blog, with poems from Mima, Maltings and BALTIC. There are also videos of Kate performing these poems at Mima and Baltic.

It was interesting for my poetry head how Kate revised those poems in between events, to give a kind of baton-passing to the next set of conversations, boiling down the images, and looking for what survived the immediate context and conversational references. Having a poet-as-rapporteuse is, I think, a really good idea. If Kate’s busy I may be available, just ask…

I was also really interested to see how the mix of speakers and Open Space worked. Speakers give insights, stories, and provocations, and can plant themes for discussions – this is both their strength and their weakness, for some people, as they allow the organisers to shape the agenda, to curate the topics and voices. Some people enjoy sitting and listening more than others.

On the other hand, Open Space suits some groups, situations and people more than others. Some find its very openness difficult to navigate, either as participants or as organisers. Personally, I tend to prefer more structured formats as both attendee and facilitator, but with good space for improvisation. I like to have a plan, even if I generally depart from it at some point. (The most important part of any event plan for me is actually what you want to get out of it, not the timetable.) Open space is both structured and totally open, so the open space sessions were an exciting leap for me too, especially in the larger event at Baltic.

What I noticed was that the smaller groups tended to be more relaxed, and to perhaps be more simply positive. The larger group seemed to give themselves more permission to be doubtful or challenging to consensus. This may have been coincidence, a response to the speakers, or maybe I inadvertently put some fear into the room at Baltic by asking people to step up to the mic to introduce their topics.

What was clear though, was an appetite for this kind of creative conversation, and for some practical next steps. This is what the organisers will be thinking about next. (As the photo above shows, though, sometimes ‘the only thing that could happen’ is not quite what you planned…)

If you are interested in the debates about diversity, and the interaction – I was going to say ‘balance’, but that’s only the right word if we think about it in gymnastic-dance terms – between creativity and equality or equity, you should have a look at the US debate, starting, obviously, with Createquity’s summary. It starts by considering whether arts organisations are obliged to diversify more mono-cultural audiences, and moves on from there. It’s a theme that lay underneath many of the considerations of power and access discussed at the Eclectic conversations.

My response, for what that’s worth, would come back to asking ‘why wouldn’t you?’, and probably quoting Mayooni Boonham’s phrase ‘it’s not exotic to be interested in everything’ and adding ‘and everybody’. That’s what I want from the cultural sector, and we won’t get it without involving a wider range of people than recently, or by boxing off work by different looking/sounding groups of people. If you want a more business-case focused set of answers, you could read the paper Tony Nwachukwu and I wrote here.