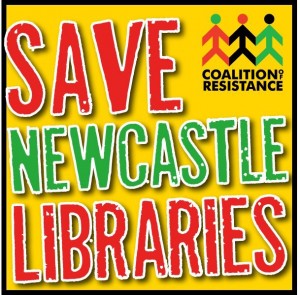 Below you will find the most eloquent bit of writing you’re ever likely to see on this blog. It’s not by me, it’s Lee Hall’s open letter to Newcastle City Council about their proposals to close a large number of libraries, as part of a suite of cuts to public services in the City. They have also proposed cutting their funding to arts and cultural organisations entirely over a three year period. So that’s to the likes of Seven Stories, Northern Stage, Theatre Royal, Live Theatre, Great North Museum…real jewels in the crown not only of Newcastle but the North East, the North and, well , England and the UK. It leaves you open-mouthed, especially when you’ve spent the time and energy building that support up as so many people I know have. If Newcastle go this way, nowhere is safe.

Lee is obviously getting good at writing letters of protest, as this is a follow up to such hits as ‘Letter to ACE about Side Gallery’. He quite rightly positions these betrayal these choices represent in the history of the Labour Party and the Labour movement as well as the government’s cuts. These lead to savage reductions in Newcastle’s overall budget – saving a third over three years. But Lee’s letter, and the words of author Alan Gibbons at a recent meeting, did make me think the following.

When is a Labour-led council going to do what any self-respecting banker would do and tell the government they will not deliver their cuts, and see what happens? As Alan Gibbons put it: ‘a Labour council should not be acting as a conduit for the cuts made by a millionaire’s cabinet.’ I worked with Alan on some training many years ago, and I seem to recall he was, as I was, more positive than ‘the next man’ about the influence of Liverpool Council’s refusal to do the Tories’ dirty work in 1984. (He’s from Liverpool, I was there as a student at the time.) We should not forget, though, that successive leaders of the Labour Party have seen being ‘reasonable’ about this sort of thing as a sign of electability.

It may be that the City Council are attempting scare tactics with these proposals. I suggest they do so with their own careers and future seats, rather than local people’s lives and opportunities, by refusing to play the government’s game. They are in an awful position, I recognise, but given the scale of this government’s destruction of the North I’m not sure I see what is to be lost, even if they go down fighting? Even if choices are to be made, do they want to do this?

Anyway, click on the image above to go the Save Newcastle Libraries campaign, here’s Lee Hall’s far wiser letter:

I am writing to urge you in the strongest possible terms to rethink the the recently announced programme of library closures. I can see the council is in an invidious pos
ition. The Coalition’s programme of austerity is wrongheaded, self-defeating and vastly unfair. However, a Labour administration which would even consider closing all local libraries travesties the history of the Party and the Labour movement. For more than a century Libraries have been central to a vision that ordinary lives are blighted if they are denied access to learning and culture. The idea that a library should be at the heart of the community from the pit-head libraries of the late Victorian Age to the library van that used to arrive once a week in Walkerville when I was young was at the centre of the vision of the just and civilised society we were all trying to build.

This notion that the library was central to our lives survived two World Wars, the Great Depression, Thatcher and any number of philistine administrations. If these closures go through on your watch I believe it will be a scar on your legacy you will regret for the rest of your political life. These are difficult times but they require much more canny solutions. Although removing the libraries will take away vital support for the poor and the elderly who use them as a daily resource (inevitably putting the strain on many of the council’s other budgets) few people will actually die. But you will kill generation after generation of kids who, denied access to culture, science, business, technology or art, will not become the scientists, doctors, lawyers, politicians, writers or psychiatrists who will sustain the region, protect the vulnerable, kickstart the economy and provide a civilised environment for us all regardless of how economically underprivileged we are. You consign these individuals to a life of underachievement but you condemn the people of the City to decades of economic and cultural sclerosis which will be just as real and devastating.

It is clear that since the death of heavy industry on Tyneside that the City has survived by rethinking itself. By promoting its cultural legacy it has found a pride and prosperity that seemed obscure and unthinkable only a few years ago. The rumoured cuts in the Library Service and the Arts budget seem to be stabbing yourself in the heart. The effects of Art and Culture in the City have very real and demonstrably positive economic effects but what remains unaccounted is the sense of pride, raised spirits, a culture of innovation, forward thinking, cohesion and fortitude which when removed will prove enormously costly both economically and spiritually.

Culture is not an add on, culture is not for the privileged. It is who we are collectively, it is our conscience and it is the air we breathe, it has always been seen by those on the Left, and certainly in the Labour Party, as fundamentally important as Health and Education. Indeed it is an index of how healthy we are and the guarantor of how healthy we will become. I believe you are making a catastrophic personal and political decision. If you close the door on this legacy it will never reopen.

I hope that the recent announcement is merely a political posture to shame the Coalition into facing the consequences of their ill thought through fiscal policy. You must not go through with this. Your job is to protect and provide for local people – you must find other ways to resist and protest. The irony that Amazon evades the very taxes which could support core services like libraries would appear to presage an age when culture and learning are a privatised pursuit of the few. We must not let that happen.

These are extremely difficult times and they demand much more imaginative and radical responses than acting as the Coalition’s henchmen. Working men and women in the North East have fought, generation after generation, for the right to read and grow intellectually, culturally and socially. For the right to be as ‘civilised’ as anyone else. It is a heritage that took decades and decades to come to fruition but will be wiped out in a moment. You are not only about to make philistines of yourselves, but philistines of us all.