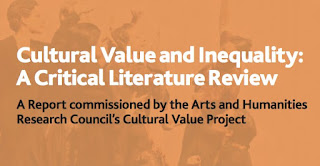 Sometimes the world throws out comedy timing. Sometimes it’s simply funny. Sometimes, more often these days, it seems, the universe displays a black humour. And sometimes it can be just a bit embarrassing….


Today AHRC published Cultural Value and Inequality, a new critical literature review by Dave O’Brien and Kate Oakley, part of the AHRC’s extensive Cultural Value Project. (So extensive even I was involved in one of the projects it funded last year.) It’s a really important piece of work, and a very strong and sharp one. (It boils a lot of work down to less than 20 pages plus a bibliography that could keep one occupied a good while.)


At the heart of the report are questions of who gets to make culture, who gets to (or chooses to) consume it, and what impact inequality has on people and culture alike. O’Brien and Oakley argue that the two need to be considered in relation to each other, rather than separately. They focus particularly on race, gender and class, where, as I know from some work I’ve been doing with EW Group recently which I’ll write more about to when I can, there is more material. They also highlight a lack of research around, for instance, disabled people as workers in culture. It’s a short and stimulating read, and concludes by seeking more interdisciplinary research (as opposed to art form or area specific work) and improvements in data collection to inform analysis and understanding of how inequality works within cultural value.


Coincidentally O’Brien and Oakley’s argument that consumption and production need to be seen as two sides of the cultural value coin was also made by Sarah Brigham of Derby Theatre this week in (on?) The Guardian. She described the way in which diversifying the artists a theatre works with can help broaden the audience – and vice versa. She also tells the story of a ‘cultural leader’ who got their hot tips entirely from white men in London. That could be so many people it’s not even worth wondering who it was, but it brings me to the embarrassing and depressing bit….


Shortly after reading the report on cultural value and inequality, I read the news that the new Commons Culture, Media and Sport Committee is to be made up of 11 white males. This is the kind of national team line up not thought a good idea since Viv Anderson was a boy. (It’s a football reference, yes, but important cultural history too, look it up…)


This is, as I said, both depressing and embarassing in its symbolism, even if you think the Committee is irrelevant to your work. (It isn’t by the way, unless you think democracy is irrelevant.)  Diversifying the workforce is one of the most urgent challenges facing the cultural sector, and this certainly isn’t going to help. Even us white men of a certain age are getting tired of listening to white men of a certain age and their views. Last time I said something along those lines in a meeting I mysteriously dropped off the invite list for subsequent gatherings.


No time for deeper analysis right now, if there’s one to be made. I do, though, look forward to seeing the Select Committee appear on http://allmalepanels.tumblr.com.