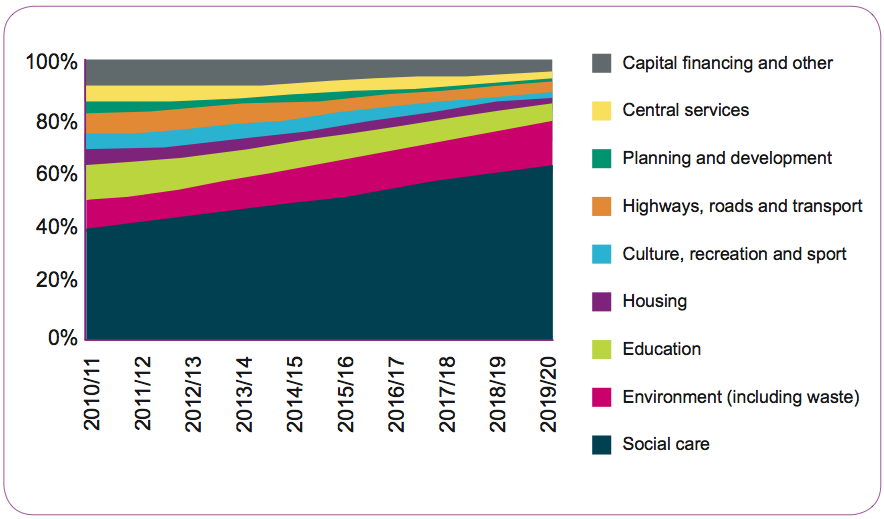 The ‘usual’ shavings and savings, restructures and fluxes of local government have been replaced by a tremulous and terrified peering over the precipice of a massive, jaggedy, ‘tipping point’. On the other side, many of the services we have taken for granted for a long, long time, from the bins to the books and much else, evaporate before our eyes, replaced, if at all, by pale but shiny imitations of themselves whose bar codes we scan to pay, or by vintage-tinged volunteer versions. (The image above, from an LGA report last year illustrates this.)

We’re not there yet, and it is a far broader attack on public services than just ‘cutting the arts cos it’s easy’ but evidence of reductions in arts funding as part of the multiple whammy of cuts to ACE and their funding, uncertainty of lottery funding, competition for other grants and for earned income can all be seen in Arts Development UK’s recently published report on Local Authority Arts Investment & Partnership.

This paints a fairly gloomy picture, albeit one with some brighter patches. The report’s introduction and the article about the report on Arts Professional don’t exactly sugar the pill or hide from the key message of polarization and threat, but do try to accentuate what positives there are. These arguably include some return of capital funding, greater understanding of contribution to corporate priorities, and local authorities generally getting on better with ACE. (I suspect this last is partly because dealing with accidents and emergencies tends to bring people together powerfully more than the everyday.) The headline figures are projected service reductions in budgets of 9.66% in 2013/14, or 12.26% taking inflation into account.

• The lack of arts officers – more than a third of councils have no direct arts services – is bound to have an effect on quite how well the arts can deliver against ‘corporate objectives’, as a good arts officer connects arts provision strategically across the authority. The report does not cover the effect of staff cuts at senior levels in local authorities, which can reduce the number of influential Corporate Directors Who Value The Arts, or have it importantly in their remit that might, in theory, compensate for that. (Most senior local authority staff and Cabinet members increasingly having to carry ‘diverse’, not say ‘random’, portfolios.) This all affects those who might not consider themselves at risk from local authority funding cuts, including individual artists.

• The effects on the ecology of this micro-system could be multiple and contradictory. In some areas, ‘withdrawal’ by the council has freed up space for others previously rather sidelined, and stimulated new events. (As I mentioned the other day, Darlington might be a case study here, with strong voluntary efforts via Darlington for Culture, new ambitious festivals such as Jabberwocky Market and the Festival of Thrift, alongside a new approach from the Council via Creative Darlington. Not to say that’s better than what was before, necessarily, but to suggest cuts don’t mean no art.) In others it will mean getting on the bus to the nearest town with ‘something happening.’

• The interaction of local authority and ACE funding is going to be particularly tricky in the upcoming NPO round. As with the various ‘merger’/share back office hints being dropped, transparency about process and strategy is going to be key to faith in the choices made. (And not just to current NPOs.)

• Making the case via the impact on local people as well as the quality of the art is going to be ever more crucial. Our definitions are, therefore, going to have to be both flexible and rigorous. Using the £ symbol will be important, but needs to be used wisely. I am wary, for instance, of the ‘good news on leverage’ squeezed from the report. Leverage has gone up on 2012, to £4.04 per £1, though it is still down significantly on 2011, when it was over £6. For me this doesn’t necessarily suggest better work, but could be a function of the necessary fiction of most leverage figures – if the audience and other funders were going to spend the same amount, and I reduce my amount, my ‘leverage’ improves. But is that a good thing, or even a thing at all, other than a saving for me?

Anyway, it’s necessary reading, and may be useful for discussions with local politicians and officers.