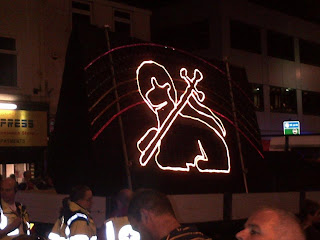 I did a lot of writing in August and early September, a draft of a paper, or part of a paper, that meant a big pile of reading, a lot of thinking, avoiding distracting thoughts, and much application of backside to seat. (This last being the key skill of all writers. More about the ideas anon.) I think I pulled the muscles I use for blogging. Anyway, September is nearly done and I feel an urge to get back to it, so here’s (pauses to pick arbitrary number…) 6 recent things I could say a lot more about:


1. Tees Valley Arts, where I started my professional career in the arts (my pay went up and the hours got better, by the way, though I was leaving a job as a Head Chef, hence  my impatience at times with some arts assumptions this is the only badly paid sector) is celebrating its 30th birthday. Some quotes from its illustrious alumni, and me, in its recent newsletter. (You can also read what Director Rowena Sommerville thought of her Swallows trip to South Africa.)


2. If you want a sense of quite how Dame Liz Forgan feels about Jeremy Hunt read this interview in the Camden New Journal. Typical sentence: ‘She doesn’t halt there.’


3. A question that came to me the other morning at the gym and now won’t leave my head: ‘Why is Fitness First the place I go that is most representative of the population of Stockton – a more diverse and interesting mix of classes, ages, job types, races, genders, body shapes even, than any arts ‘audience’ I can think of right now?’


4. My surprise when one of the thrill-seeking audience at a poetry reading I was doing last week in Richmond Library in North Yorkshire came up to me in the interval and rather sheepishly confessed to having worked as a consultant for Gerry Robinson during the merger of the regional arts boards and the old Arts Council of England. (I know they were thrill-seekers because there were storms and floods outside and it was a terrifying drive home.) She was now a gardener, not a consultant, which must mean something.


5. A deepening sense that not just the role of the arts but the whole idea of regeneration might need to be fought over again, as the responsibility for dire economic circumstances continues to shift to individuals – increasingly and depressingly held to be to blame for their unemployment – and from there to whole regions – held to be ‘dependent’ on public sector jobs, say. (See my comment on this blog for the recent Crossovers conference for one example of what makes me feel this, and for a reply from Melanie Smith.)


6. Like all right-thinking 40-something men (and no doubt a few women, but mainly men), recent train journeys have been marred by no longer being able to buy The Word magazine. David Hepworth on the lessons from why they had to stop publishing had a number of resonances for resilience in the arts, and the ability to change. Two quotes can illustrate that: ‘The boss of Hearst Magazines in the United States said recently that all magazines needed to have five revenue streams. They used to have two. It was hard enough to get those.’ and ‘People who don’t run their own companies are impossible to talk to because they live in a different world.’


Oh and it was Preston Guild, which is where I took the picture above. Only 19 years and 11 months till the next one…