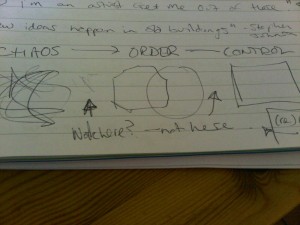 Despite this being the flipside of my last post, I’m going to try hard not to make it a series of negatives. Life’s not that simple, is it? Having said that, even my glass half-full tendencies have been challenged a lot this year. As with the A Side, I’m restricting myself to 5 themes.

Inequality
I know Climate Change is probably the biggest threat to humankind and the sketch we call civilization. But ask me what I feel about the UK right now, and a bigger distress is the well-documented growing inequality and its effects. Restricting comments to the cultural sphere is counter-intuitive, because the inequalities there are fed by the wider pattern, just as they feed into it. But that’s my focus, and culture is caught up in inequality like a fox in a trap.

In The Art of Living Dangerously we raised the issue of who gets to be an artist, and how people of all backgrounds might build sustainable livelihoods in creative work. This also underlies one of the strongest campaigns (and catchiest hashtags) of the year: a-n and air’s #payingartists. Average earnings for artists have always been low – as Hans Abbing has shown, it’s a field where many enter, and the most visible can win BIG, but most do not. This is only getting worse.

The pressures on organisations are leading to more use of volunteers in previously paid roles, but oddly enough not at the CEO level. The argument is sometimes that these are ‘entry level’. This has some, small, truth – but wouldn’t the idea of ‘exit level’ voluntary roles (not trusteeships) – be equally compelling for those retiring with a pension? These are equality issues as they narrow the social mix in the workforce even more than ever.

Similarly, we can see the ongoing issue of ‘rebalancing’ the distribution of funding across the country as an equality issue, given the widening social and economic divide in the UK geographically as well as hierarchically. Them that’s got shall get, them that’s not shall lose is not a quotation, it appears, but core government policy. The effects of this being the de facto policy in the cultural sector would be disastrous. Sadly, in 2014, we have seen no significant progress in ‘rebalancing’, despite further cogent evidence and argument from Messrs Stark, Powell and Gordon in The PLACE Report. ACE’s new NPO represented consolidation more than rebalancing and a number of developments – some not through what others would call transparent process – tended to reinforce the idea that if you’re big and know people who can talk to people you will do better than if you have no assets and no networks. (Not to say those are bad developments as such, just they are unequal developments.)

Ambition
To flip it around a little, and thinking of the £78M going to Manchester for the Manchester Factory as an example, I think 2015 will see the continuation of a theme from this year and previous. Long-term ambition will drive major investments against the run of play in times of shrunken state spending. That may be into capital like The Factory or festivals or artist spaces – ambition of scale and depth ideally, rather than of grandiosity. I’ve my doubts whether another big thing in Manchester is the best use of £74M, and don’t think I want a ‘Northern Powerhouse’ to be so centred on any one place. But it is a recognition of the long-term commitment to culture in Manchester – from the Anthony Wilson days of course, but also of the City Council leaders, and the people working in culture in the city – at all levels, and the quality of the work done. They have developed and maintained a narrative for a long-time – not simply from MIF to MIF. That gets them invited to tables to talk. That has been a collective effort – or so it seems from my visits – but the same is true at individual organisation level.

I’m pleased to see a Case for Culture being developed again in North East England, and hope it will galvanise the kind of collaboration and investment the Northern Arts-led Case for Capital did in the 1990s. It has the advantage of being informed by all the learning from those capital developments, so can learn all the available lessons about cost, involvement of local audiences and so on. (This talk of ‘ambition’ might sound dangerously ‘entrepreneurial’. I see no reason ambition cant be collective and socially constructive – we don’t all have to be ambitious for just what George Osbourne wants.)

HEIs
If there’s an NPO that’s not been encouraged to work with a university partner I’ll be very surprised. Many are of course already doing so, some brilliantly, and this is A Good Thing. As I mentioned yesterday, I’ve spent a lot of time and effort this year helping move a local authority gallery into a university and I wouldn’t have done that if I didn’t think it was the best thing to do. There are many great partnerships between Universities and cultural organisations, focused around research, archives, collections, community engagement, artist development and more. (HEIs have a lot in them.)

What working with HEIs is not, however, is a Get Out of Jail Free Card if your local authority cuts its funding. HEIs are – in my experience – peculiar organisms. (That is not a spellcheck mistake for organisations. I mean organisms.) They have deep reservoirs of expertise and knowledge. They play a key role in cultural life of many people, not least students. They have the potential to be huge drivers of social and civic change – and to assist with social mobility and inequality.

They are also hierarchical and complex to navigate, and as it has been suggested to me, by someone in an HEI, driven to own everything they come into contact with. They are also alleged to be reluctant to get their big cheque books out and a bit on the fickle side. So as the local authority leg of the arts funding stool finds itself being sawn down by this Coalition government, and the philanthropists in some places are mysteriously absent with the folded up napkin/telephone books to fill the gap, no one should see HEIs as a panacea. Partnerships need to be appropriate, well-worked through and developed slowly over time.

Also: no offence, like, but I’m probably sticking to autodidactism until I’m the only cultural worker left without a PhD.

Diversity
One of the effects of inequality in the arts has been a lack of diversity, an inability to make the whole of our cultural activity look and feel like the whole of our society. There have been many attempts to tackle this, of course. But few have made the kind of paradigm shift desired. The issues of class, gender, ethnicity, disability et al remain hard to resolve for a sector that ought to be leading the way at a time when the likes of UKIP are promoting values counter to a diverse, creative society.

So I welcome ACE’s recent renewal of its approach to diversity, which I see as combining attention to numbers and proportions with the ‘creative case’ in a potentially powerful way. I’ve grown weary of interjecting in meetings to point out that too many of us are broadly the same type of white male when it comes to our notions of ‘culture’. It’s not easy broadening that out, mind, given the quality of the people there, and the need to avoid simply slipping from one set of usual suspects to another. But the result of not making a shift, no matter how awkward, is likely to be a kind of status quo, even staleness, not to mention the moral or inequality dimensions.

So whilst I’ll continue to think it’s a missed opportunity that the North East Cultural Partnership board is 24 good people who just happen to all be white, and I’ll argue for diversification of organisations I’m involved in, we should also expect ACE to diversify or rebalance its own staff, board and grant-giving. Looking at the National and Area Councils, none seem as reflective of they could be of the diversity of the population. 2015 should see some SMART targets being adopted by ACE about grant-giving looked at via geography, gender, disability and ethnicity as well as workforce and types of work. (They are keen for everyone else to have SMART targets, after all….)

The Mysterious Case for/of Cultural Value
There are lots of overlapping attempts at coming up with a defining statement of ‘cultural value’ that might feel true and convincing to government (national and local), artists, the cultural sector, academia, partners such as public health and economic development, and even, potentially, that mythical beast, ‘the taxpayer’. The search for understanding, definitions, evidence and arguments is involved in different ways in the AHRC’s Cultural Value Project, projects such as Paul Hamlyn Foundation’s Artsworks, and, of course, the research and advocacy work of ACE.

Some attempts, such as ACE’s ‘journal’ CREATE, based on their ‘holistic case’, have felt overly-defensive, whilst also avoiding the issues of distribution of funding. Sometimes the more that’s said, the more debatable it all seems, the vaguer it gets, and the harder it gets to actually evidence in ways which convince those multiple audiences. (I, for instance, get prickly when lectured about creative education by a public school head teacher. I am not interested in creative education because it gives state schools kids elements of public school education. I’d rather see creative education helping public schools produce more rounded politicians and bankers than we see, and state schools produce brilliant people of all kinds, putting the A in STEAM.)

For me, the strongest thinking I’ve seen recently in this direction was the paper ‘Raising our quality of life: The importance of investment in arts and culture’ by Dr Abigail Gilmore, of CLASS, the Centre for Labour and Social Studies and the Everyday Participation project. This combines an approach that emphasises ‘the importance of arts to the quality of everyday life’ whilst also arguing for a cultural policy based on local responsiveness, equitable distribution, democratised and publically planned involvement in culture. Gilmore also argues for policies and funding behaviour that develops resources for ‘everyday participation’ and greater ability at community level for people to develop culture, especially opportunities to participate. I see many connections to the kind of ideas in the MMM/nef/Exchange paper with which 2014 began for me, The Art of Living Dangerously.

Those were just a few things I see looking back on 2014. I could have written about other things, from the Select Committee into ACE to the prog-rock tendencies of street arts, but these last two blags are a 10-track album in my head, not blooming ‘Sandanista!’

Of course, 2015 is the year when we get the chance to change all of this again. I am talking about the government, of course, but I’m also talking about us. See you there.