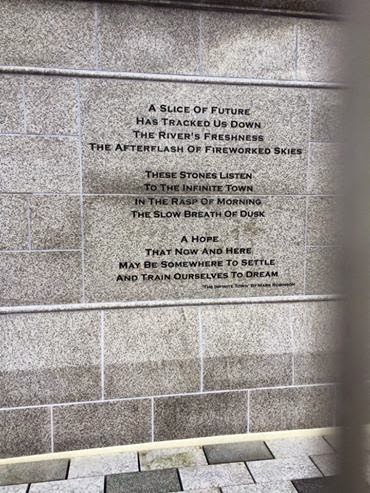 I mentioned in my end of the year round up that I had been commissioned by Stockton-on-Tees Borough Council to write a poem for use on Stockton High Street. A couple of days later I went into town and happened across it, already in situ, albeit behind a security fence. As you can see below, it also had rather a large bow on top of it – for the holiday season, not as part of the permanent structure! Above is a photograph of a poem . It is inscribed in a large plinth on the High Street, part of a huge redevelopment of the town centre. From the summer, an automata in the shape of a train will arise from the point (once a day, in Trumpton-style). 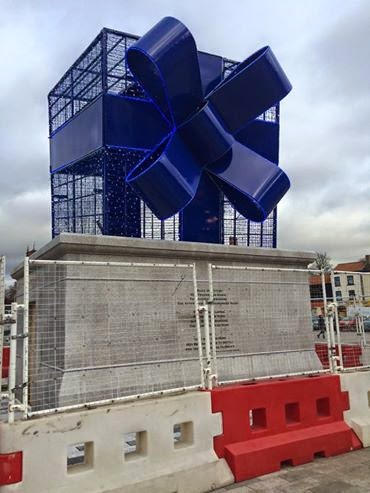 If you know Stockton you may pick up references to the Infinity bridge, which you can just about see from the plinth, the Tees which is nearby, and the town’s firework tradition. (Starting with the invention of the safety match and through to today’s festival finales.) It was also, of course, part of the birth of railways.

This is a very different kind of cultural intervention than most of what I write about here, but Thinking Practice is not called that for nothing! And this is definitely one text with my name on that cannot be put away on a shelf in a cupboard somewhere!