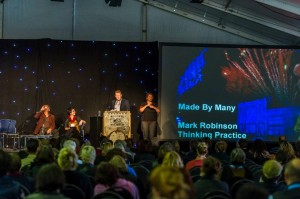 I am currently in Australia, where I was a guest at the Kumuwuki/Big Wave Regional Arts Australia conference in the small town of Goolwa, about an hour from Adelaide in South Australia. (I’ve continued on to Brisbane and Melbourne to give talks and workshops on adaptive resilience, working with Board Connect, Arts Queensland, Arts Victoria and next onto to Sydney for a talk at the Australia Council.)

One of the main themes of the Regional Arts Australia conference was the resilience of regions, connecting to the resilience of regional arts sectors but also communities. I took part in a panel that followed up on the Community Arts Network South Australia special journal that responded to my paper Making Adaptive Resilience Real, and gave the closing keynote of the conference – in a great big tent between the cricket club and the river (one of TS Eliot’s deleted lines?).

Being the final keynote was both useful – in that it gave me a few days to tune in a bit to people’s concerns and themes and tailor my keynote to that a bit – and daunting in that I felt a responsibility to send people off full of energy and positivity, and didn’t want to repeat what others had said. Neither was it the time or place for an analytical run through the adaptive cycle or the 8 characteristics that help organisations be adaptively resilient.

So I talked about home, as many of the other speakers had, of how the best of whatever you call what’s happened in the arts in the North East of England in the last two decades has happened because of an interest in the resilience of our home – making it a good place to live and work – and making the sector strong enough to grow and develop to play our full part in that. (By making art, I mean.) The key idea was that this needs to be a collaborative effort over a long period of time, involving organisations across scales (ref. Northern Stage’s work at St Stephens), all parts of the community including business (ref. Sponsors Club, including reading a bit of poetry from the recent publication I wrote about them) and developing things – organisations and festivals – which become an environment with deep, nourishing roots for audience, art form and place development (ref. Stockton International Riverside Festival).

I also spoke about an example from elsewhere, using one of the case studies in the work done for Arts Council England’s creative case for diversity – how Punch induct staff by sending them out to walk the local streets to get to know people. I threw in the notion, coming from the recent work with Exchange, MMM and New Economics Foundation, that the resilience of the arts ecology and local community well-being can be linked in a ‘virtuous circle’ that can really help us change the paradigms in regions where a growth-based economy is a kind of creation myth but with a malign reality, but that there is a real need to ensure sustainable livelihoods for artists and arts workers at the heart of that, and a diverse population of those.

There were also references from Patrick Kavanagh, Sid Chaplin and Deleuze and Guatarri, which is, I suspect, the first time they’ve ever been in the same list. I find the conjunction of Kavanagh’s ‘parochialism is universal – it deals in fundamentals’ (parochialism as in parish rather than small/narrow) with Delueze and Guatarri’s notion of ‘minor literatures’ being revolutionary because always political and always collective, a useful one. I may be the only one, mind.

I concluded that:
Resilience (lasting) matters – but some arts also need to work as the disturbance in the environment – maybe be short-lived but having lasting impact by changing the terms, starting an argument, introducing a new idea.
Collaboration by very diverse people, including those far beyond ‘the arts box’, is what makes the contribution to regional life greater
If we make our approaches people-centred, asset-based and dynamic we can ignore or engage with the metropolis on an equal footing.
I will put the talk and slides up when I get the chance to make all the changes I made to what I planned to say. More on this great experience anon but huge thanks now to Steve Mayhew and Jo McDonald from the organisers Country Arts SA for bringing me over, and to the small town of Goolwa for a good time. (And bless the search gods for making my paper visible.)