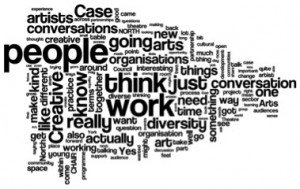 Earlier this year I was commissioned by the Creative Case NORTH consortium, led by theatre company Zendeh, to carry out a meta-evaluation/data review of material arising from 3 year’s worth of work. Having had some involvement in the first year’s sessions in the North East I was really pleased to do so. (It has proved complementary to much other work this year, such as a major report for Arts Council England on children, young people and diversity and equality I worked on with the EW Group.)

My approach to the job involved interviews with people, an online survey, and a textual analysis of the data (reports, evaluations, transcripts and even poems) generated by the work. I remember saying at the interview I was especially keen to do this last element, given the thorniness of issues around the language of diversity. Half-way through about 180,000 words I was less sure of the wisdom of my approach, but it was worth it in the end.

The Executive Summary can now be shared, and can be found here in the publications part of this site. The full report, which is has a lot more detail and discussion in it is well worth reading if I say so myself, is available on request from Creative Case NORTH by emailing north@zendeh.com.

CCN has begun to create change through a process in which dialogue leads to discovery through shared experiments such as residencies and projects. These can lead to new work, which when reflected upon can lead to new understandings and new ways of working. That makes it sound easy and linear, albeit perhaps a line that forms a circle. Despite the programme showing it is far from easy and linear, this approach has had some success, although for many the pace the pace needs to be quicker. Many are yet to feel the impact or the imperative.

The report makes some recommendations for the next phase, which I understand is now being developed with support from Arts Council England. Key amongst these is making sure the language of the Creative Case is clear and powerful, and the stories of its benefits told well, so the work can reach more people and create deeper change in organisations. As John Dyer said at the recent ‘No Boundaries’ conference, it is time to move from the why of diversity to the how: to show not tell. One respondent to the survey wanted ‘bigger bolder braver!’ This means being practical as well as aspirational.

For it is in practice as well at the level of cultural definitions or aesthetics that many are left out, not reflected in our culture, not helped to make their work, not employed, not heard or seen on an equal basis. (Susan Jones, writing for the Guardian, recently quoted a line of mine about ‘even white men of a certain age’ being bored with hearing from white men of a certain age, which was nice, though did make me reflect it might have sounded as if I thought my boredom was a terribly pressing problem. Just to be clear: the boredom of white men of a certain age is the not the big issue here, far from it…)

One of the interesting things of reading transcripts from events held over a thee-year period was hearing how the conversations changed. (The full report includes ‘word clouds’ illustrating this.) It was noticeable how the events held this year, before the general election, contained huge threads of fear and anxiety about the effects of political and social change on people of all sorts. Negative political and social change appears to be ‘front of mind’ for many people working to advance the Creative Case in the North, far beyond simply the effects of cuts to arts funding.

There may be some – those mainstream leaders described as asking ‘are we still talking about this?’ perhaps – who see this as an excuse to hunker down in the comfort zone with their core audiences, citing pressure of income targets, the difficulty of reaching different audiences or artists, and so on. I might argue that the social (and charitable in many cases) functions or positions of most funded organisations, as well as a growing body of business thinking, suggest the opposite would be a better response.