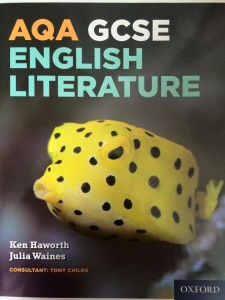 It’s a new year. I’m told that these days by the sounds through my office from the nearby school playground, rather than by my kids needing new shoes, bags, pencils, PE kit, or, in the university years, help with the rent. But I suspect most of us of any age and family situation in the UK always associate the September turn in the weather with a new school year. We might grow nostalgic for that new book, new protractor, fresh start feeling, or we might rejoice not to ever have to go back into a classroom, but there’s some kind of emotional twitch in most of us at this time of year. (I envy the French the word ‘la rentrée’, which sums those mixed emotions up brilliantly somehow, and not just for those in education.)

Arts provision in schools is a key area of argument and activity at the moment. Bob & Roberta Smith even stood for parliament against Michael Gove to raise the issue. The changes to the curriculum are making it harder and harder for schools to support arts activity. Even changes to the History curriculum are making it harder for the many ‘industrial’ museums. Can’t have children learning about the industrial revolution, they might hear about unions or health and safety or something dangerous like that, I suppose.

Although the government tries its best to spin it, asserting in typical black-is-white fashion that it values the thing it is reducing, most readings of the statistics suggest fewer young people are choosing to take most arts subjects at GCSE. The excellent Cultural Learning Alliance explore the figures in very clear fashion here. As mentioned there is also evidence that this trend is worse, in some subjects at least, amongst young people from more deprived areas. It seems also to be reinforcing the long-standing gender differences in take up of arts subjects at GCSE.

Schools trips are also getting squeezed, be it by teacher nervousness or actual budgetary or curricular pressure. I saw some evidence recently that this is especially so in special schools which is worrying.

One rarely sees English Literature in the list of arts subjects, although I think it should be there. The upside of it being compulsory is that young people get introduced to some ‘great’ books, some of which are actually great. The downside of it being compulsory is that compulsory things are often horrible when you’re at school – for some, unlucky, people it’s a bore and serves to put them off novels, poetry and plays for life. I know we don’t like to admit this, but that was my observation at school and is what I’ve heard from many people since. 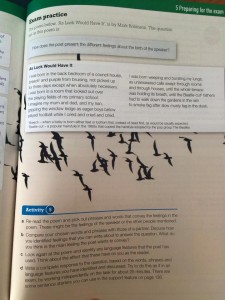 So I’d like to apologise to any GCSE English students about to begin the AQA GCSE English Literature syllabus using the OUP student book for the bit in the next two years when you get to my poem, ‘As luck would have it’, if you don’t like it. I’m sharing the pictures here not for education purposes but simply as illustration – click them for larger versions. But if any regular readers want to answer in the comments section, please feel free…

I’m sorry I don’t have the resolve of my hero Adrian Mitchell to ban my poems from exam-related books. It wasn’t the money, I actually let my publisher keep that as I was feeling generous and grateful and a bit guilty for not being a better-selling poet, it was the excitement that maybe someone who enjoyed Eng. Lit as much as I did might found my work through the poem. It was that ego-serving moment we almost-unknown poets get when someone responds to the message in a bottle that is a book of poems. I was pleased you have to compare and contrast it with Siegried Sassoon, not that I’ve read him much since I was at school. I was even more pleased to be used in this way as I don’t even know the editors in real life. 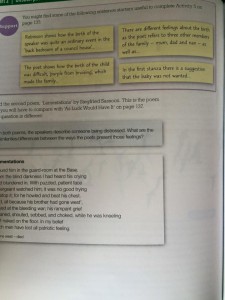 It is rather disorientating to see the questions posed, especially about something which is a reimagining of my own birth, and to read the example first sentences to answers. I’m not saying any of them are unhelpful, of course, it’s just a bit odd. It was amusing though that a footnote was needed including the comical phrase, ‘the pop group The Beatles’. Tell me even 14 year olds know the Beatles were a pop group, please? And I’ll maybe tell you one day about the time I offended creative education guru Sir Ken Robinson (no relation) by admitting I really didn’t like the Beatles at all.

I put it all down to a good bad education…