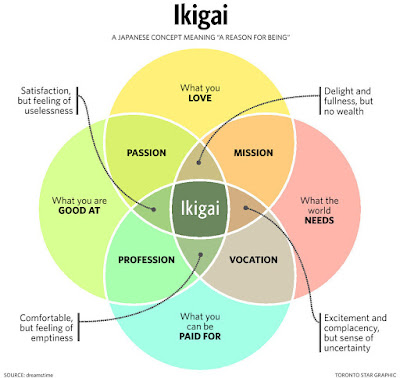 1. IS THIS JAPANESECONCEPT THE SECRET TO A LONG, HAPPY, MEANINGFUL LIFE?
I don’t want to get too touchy feely on you, I promise. But the picture above struck me as a useful summary of the kinds of trade-offs/hunt for the sweet spot that artists and arts organisations face all the time. How do you find a way to do something that you love, that the world needs, that you’re good at and that you can be paid for? Or reconcile yourself to two or three out of four? No space for details but I think I’ve felt all four of the restricted ‘results’ in my life.

2. CREATIVE HEALTH:THE ARTS FOR HEALTH AND WELLBEING
One of the summer’s potential blockbuster reports, a little undermined by trite marketing and summaries, this report sets out the case for the role of the arts in health and well-being. This is a subject I am a little cynical about – not about the benefits, but about the efficacy of reports like this. (I write as someone who signed the first partnership agreement between an arts organisation and an NHS Trust, launched with the then CEO of the NHS.) Is there killer evidence here – well, maybe, but no more than at various times before. The recommendations all make sense, but I wonder if it’s telling that
the one relating to NICE comes last?

I do find the illustrations by David Shrigley in the short report cringeworthy, falling headfirst into the ‘arts as cheap panacea’ trap that makes me want to take up warehousing. The gifs Arts Council made to promote the report, however, were fun – the eyedrops becoming a repeated poke in the eye, for instance…

3. FROM DESIGN THINKING TO SYSTEMS CHANGE: HOW TO INVEST IN INNOVATION FOR SOCIAL IMPACT
The RSA have a new mantra ‘think like a system, act like an entrepreneur’ which I find alternately intriguing, even energising and slightly unnerving. (It’s the entrepreneur word, I think, and its baggage.) This report gives some flesh to this idea – quite complex flesh at times, but it is worth sticking with it if not your preferred style. The application of neither design thinking nor systems thinking is new to the arts strategy, but the combination of them is rarer – and may well be useful for addressing timeworn issues.

4. TOWARDS AN EXPERIMENTAL CULTURE IN GOVERNMENT: REFLECTIONS ON AND FROM PRACTICE
Not new but related in its potential application to designing new cultural programmes to address persistent issues is this paper from NESTA. I was particularly attracted to the idea of moving away from ‘good ideas’ to testing hypotheses. Some funders have moved in this direction in recent years, but I’d like a bit more of it. Apart from anything it would stop successive generations of funders coming up with the same ‘good ideas’. (Assuming someone bothered to keep a list of validated and disproved hypotheses, of course.)
5. ACHIEVING GOOD GOVERNANCE: A CHALLENGE OF OUR TIME
For many people in the arts Governance falls into the same category of thing as exercise, muesli, training courses, observing speed limits, and flossing your teeth. We know it’s important, and we know we need to do it, and we do, but it’s dutiful hard work a lot of the time. Achieving good governance is a bit like a New Year’s resolution: we know what we’re supposedto say… I joke slightly, but only slightly: and in my experience achieving good governance is a truly difficult task.

This report, and the allied practical guide   also published by Clore recently sets out an argument for building on strengths – and groans aside there are some – and making sure that, as the report puts it, ‘The creative abilities for which the sector is known need to be given a much sharper focus within the boardrooms of cultural institutions.’ Central to promoting good practice and more resilient behaviour is a suggested new Governance Alliance of funders to encourage strong governance in turbulent times. It would also be good to see all funders publically walking the walk themselves.

6. RETHINKINGRELATIONSHIPS: PHASE ONE OF THE INQUIRY INTO THE CIVIC ROLE OF ARTSORGANISATIONS
This Inquiry, led by the Gulbenkian Foundation but involving lots of others, has published the report at the end of its first phase. This identifies a strong interest in the civic role, and many case studies of
organisations working in different versions of civic space. It identified some barriers, such as exhausted leaders (my word!), skills gaps, lack of diversity and confused, unshared, language. (Of which ‘civic’ may be an example. In fact there were times throughout I thought it was making slightly heavy weather of a more exciting subject.) The report suggests some metaphors for the civic role that I find a bit too ‘municipal-civic’. I see some of my favourite arts spaces as more analogous to the bus-stop, the pub, the gym and the shops, than a college, town hall or temple. Why no scruffy or retail spaces, for example? Surely not because many arts leaders don’t go shopping for an afternoon out or to their local bog-standard pub or didn’t hang around bus-stops as teenagers?

That quibble aside, it is an interesting and positive contribution, and will be important to understand as it progress.

7. EXCERPTS FROM THE DIARY OF A BLACK WOMAN AT THE EDINBURGH FRINGE
I’ve never much enjoyed my trips to the Edinburgh Fringe, to be honest: it makes me want to go home and write a hopelessly unfunny show called ‘Bringing Out The Introvert In Me’. This piece by the now-award winning Selina Thompson puts all that into its proper perspective, as well as giving me fresh stuff to think on about visibility, white blokes getting out of the way, representation and the sheer guts involved in any artist or writer stepping forward, but especially those who don’t see themselves reflected in their audience such as artists of colour. It also really makes me wish I’d seen her show. (If I can be allowed a slight attempt at performing arts credibility, I saw her do Chewing the Fat at
Arc a few years ago and was blown away by that, and I heard nothing but raves about Salt.)

8. THE COST OFWORKING IN MUSEUMS
In a similar personal story as illustration mode is this blog by Kathleen Lawther on what it can cost to work in museums – the sub-sector in culture where the MA and internship seems to be baked in the hardest. I feel I’ve reached the point (age?) where I worry sharing my own stories risks turning into ‘stick with it, it’ll be alright in the end’, which would not be my intention, but this really took me back to a day when the kids were little, returning from a ‘holiday’ at my wife’s sister’s to a pile of letters from the bank saying ‘Your cheque bounced – you owe us even more money hahaha!’) and wondering whether writing and arts development was really going to work. And I’m old enough (cheques???) to have been one of the lucky ones…

9. IMPOSTER EXPOSED
Another personal blog that really struck a note with me and many others was this by Stella Duffy. What can look like one kind of ‘privilege’ or another is often someone holding it together feeling like an imposter about to get caught out.

10. EVIDENCE REVIEW:THE ADOPTION OF DIGITAL TECHNOLOGY IN THE ARTS
Brings together a lot of evidence: conclusion: digital only useful if it helps you do what you do, but better, but arts organisations need to broaden their horizons to benefit from others’ experiences as audiences’ expectations are changing rapidly.

11. EVALUATION IN
PARTICIPATORY ARTS PROGRAMMES
A useful compendium of 18 approaches to evaluation from the Creative People & Places Programmes.

12. VIRTUAL SPECIAL ISSUE: CULTURAL TRENDS & THECREATIVE INDUSTRIES
We non-academics without Uni library subscriptions have until the end of October to enjoy this little history lesson in capsule form. (I may have said this before, but the academic publishing model is a disgrace if you think of Universities as a public good rather than private companies, yours Disgruntled of Preston-on-Tees.)

13. ARE THE CREATIVE INDUSTRIES MERITOCRATIC?
Short answer: no, but recent research by the authors Dave O’Brien et al suggests ithe leaders in the creative industries are more convinced of this that anyone else. Go figure….

14. BUILDING RESILIENCE
Not a Thinking Practice archive bonus as such, unless something from July counts, but I’ll end on this article I co-wrote with Sue Hoyle of Clore Leadership Programme, after we both spoke and facilitated at a conference for Northern Music Education Hubs organised by Creative Minds and the other Bridge organisations in the North of England. We compare and bring together two frameworks for resilient leadership.