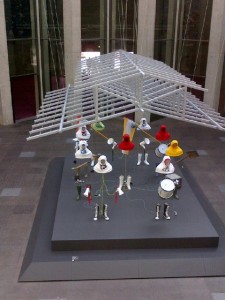 As I have few imaginative resources of my own with which to investigate the world I am highly dependent on culture when visiting places. So one of the things I’ve done as I’ve travelled round some of the cities of Australia talking adaptive resilience (more of which soon) is check out the major, and in some cases, minor galleries. I will spare you the full run down of what I saw, but I was struck by something I read yesterday, in the ebook for Rally: Contemporary Indonesian Art ­ Jompet Kuswidananto and Eko Nugroho, an exhibition at National Gallery Victoria, and thought I’d share the thought. It is something the latter said:

‘If you live in Indonesia, you will understand that it is impossible to exclude politics from everyday living. Nearly 90% of the art that is made here is a response to or influenced by the socio-political conditions of our surroundings.’

I simply wonder what the percentage in Britain is, and what makes us so much ‘better’ at excluding politics from everyday life? It can’t just be that we are the comfortable old jumper bit of the world, and Asia is the exciting, growing teenager, can it? There is clearly some exciting, argumentative art coming out though (saw two particularly exciting shows at Singapore Art Museum, as well as private gallery dedicated to work from China in Sydney, White Rabbit Gallery, thanks to Caroline Pearce for the tip off) which makes some of the gallery shows I’ve seen at home recently look at bit tame and lacking in spark, if well-executed.

There is a further thought inspired by the e-book/app form, which seems to be much more freely used in Australia than in the UK. I got good ones from the Love Lace show at the Powerhouse in Sydney (iTunes here ) and a ‘catalogue’ with video and audio for the Contemporary collection at the rather marvellous Art Gallery New South Wales. (iTunes here.) Although there are some UK galleries with things on I-tunes, you tend to have to pay for them. You are, in general, also a bit hampered downloading in situ, as there doesn’t seem to be as universal an acceptance that public-building=free wifi as I found. These added a lot to my experience – both in the gallery and afterwards. (When I’m looking round that kind of compendium, the names tend to shift into the background, so it’s good to be able to look things up afterwards, without paying £25 for a catalogue.)

So what’s stopping us? Is it just money? Do we not like giving things away, or does the BIg Bad Business Model say No? Or is everyone doing it and I’ve just not been going to the right places?