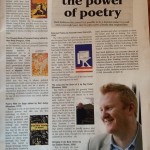 I recently agreed to write a ‘Readers Lives’ column for the Journal’s Culture magazine. This is a kind of literary equivalent of Desert Island Discs – 6 books that have been important to you in your life. Sounds like fun, I thought…

Then it all went a bit like that part in Nick Hornby’s High Fidelity where Rob can’t decide on his favourite songs. I decided to rule out novels, to make it a bit easier. I toyed with the idea of restricting choices to poetry. Then I thought be a bit broader than that but would also rule out non-fiction expect to do with music and the arts. I spent an age looking at my book shelves. Then another 2 ages writing a long list and then a short list. Then I decided to write it very quickly and forget about it. Then I took out ’10 years in an open necked shirt’ by John Cooper Clarke and put ‘Lipstick Traces’ in and pressed send before I could change my mind.

Those of you lucky enough to live in North East England can pick up a copy of the Culture magazine in many arts venues, cafes, pubs and other cultural spaces. Those of you not so fortunate continue reading, or click here and proceed to page 11 to find out which 6 books I went for in the end, or click on the picture above for a larger version. I do recommend reading the whole issue though – lots of coverage for Festival of the North East.

Lipstick Traces by Greil Marcus
I had my life changed by punk and post-punk, being 13 in 1977. (I distinctly remember seeing Magazine on Top of the Pops and discussing Howard Devoto with a friend the next day, after Games. From there it was a slippery slope to being that archetypal 6th former with Jean Paul Sartre in the pocket of my baggy overcoat. Lipstick Traces is a tour-de-force of intellectual join-the-dots that explains quite why I was so utterly changed. He connected DaDa and the Cabaret Voltaire, the Situationists, Sex Pistols, Gang of Four, and lots more, to much older traditions of rebellion and counter-culture. This book is a whole education in itself. For better or worse, it’s deep in my intellectual DNA.

The Penguin Book of Socialist Poetry edited by Alan Bold (Penguin)
I bought this book from a second-hand stall in the Student Union at Liverpool University, where I studied in the stormy mid 80s. It introduced me to an international range of poets including Latin Americans like Pablo Neruda and Cesar Vallejo, and a generation of great Eastern European poets such as Miroslav Holub, one of only two poets I’ve ever consciously asked to sign their books. What I loved was the way it shows political commitment could come across in accessible but not dumb verse, not be a matter of agreeing or not – that a poem could be an experience. Years later I was proud to be in an anthology of British Socialist Poetry co-edited by one of my heroes from this book, Adrian Mitchell.

Poetry With An Edge edited by Neil Astley (Bloodaxe)
Bloodaxe is one of the North East’s greatest cultural powers, and this was the first anthology of theirs I bought, a year or two out of University and starting to learn what writing and reading were really all about. (The Eng.Lit bit of my degree had singularly failed to teach me that.) I found so many poets through this book – from Ken Smith to Simon Armitage before his first book. I started a poetry magazine and press, Scratch, partly inspired by Bloodaxe’s example that poetry could be in and of the world. Neil’s intro even had a few hints of how to do it. The title always summed up what I aspired to in poetry – not just ideas, or feeling, but edge. Later, when I worked at Northern Arts and Arts Council, it was a privilege to support Bloodaxe.

Selected Poems – Kenneth Koch (Carcanet)
The other person I asked to sign his books was the great New York poet Kenneth Koch. He signed this book in the back of my car, on the way to Darlington railway station, after he had read in Stockton, one of the first readings I organised when we moved to Teesside in 1993. I love the humour and exuberant life in Koch’s work, the love of art and people, the friendships. I could also have picked his textbook-cum-mini-anthology Making Your Own Days, one of the best books for any aspiring poet to read.

The Long and the Short of It by Roy Fisher (Bloodaxe)
Roy Fisher is arguably the greatest living English poet. He was a model for my attempts to reflect real life and places in a non-naturalistic way, playing with realistic ways of talking about my life that are not quite realistic and thus capture some of a sense of life just out of reach. (That’s just me that feels like that? Ok…) He has a fascination with place and a penchant for stray humour I also share. I’ve never accepted that poetry couldn’t be deadly serious and funny and stretching and simply pleasurable at the same time, though I’m not sure I’ve achieved it very often – yet.

Bringing It All Back Home by Ian Clayton (Route)
This is simply the best book about music in a life that I’ve ever read, describing the many roles it can play and the many journeys it can take you on. It’s also about growing up and older in a small town, families and what can happen to them. It’s funny and full of feeling but never sentimental, and still had me sobbing at the end. My poems contain a lot of references to music, although the title of my new book, How I Learned To Sing, is a little misleading, as the poem is ostensibly about me turning into a seagull, rather than vocal lessons.