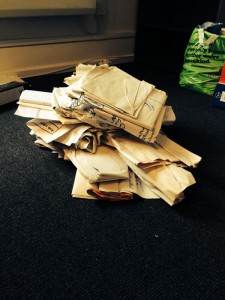 It’s been a while. My time as Interim Director at mima was a hectic one, as I also maintained my Thinking Practice clients, took on some more, and got involved in events such as Artworks North East’s conference on participatory arts. Hell, I even said no to a few things.

Often I blog more the busier I am – just I have more ideas for creative work– but not this time. I’ve reflected since a post-mima holiday on whether blogging still has a function. (I sometimes hear blogging referred to as something akin to having a myspace page…) I think it may do – for me at least – as a space to reflect, gather, remember, put thinking for future use, let people know about things.

I have, though, rather got out of the rhythm of it due to concentrating energies elsewhere. I thought I’d do a couple in the run up to Xmas and see how it goes. I’ll also be listening out. If all I hear is the void talking back I’ll be very mindful of that. I have been encouraged to get back to it by bumping into a couple of subscribers who told me they’d missed my emails. They may just have been being kind, but if you’d like to join them, do sign up to the email version.

So, before Xmas I thought I’d reflect on a few themes of 2014. I start through a personal lens. (The B-side of this blog, tomorrow, will consider broader themes of culture in 2014. It’s not all about me.)

Interim-ness
It would be wrong not to start with that 7 month-stint as Interim Director at mima,. Someone recently told me the interim role involved ‘holding a mop in one hand and a machete in the other’. This was not quite my experience at mima, although I did find myself washing windows and putting up acetate as we readied the new jewellery gallery for opening. Despite a big change process as mima transferred from the council to Teesside University, neither was it time for the machete. The Swiss Army Knife perhaps, but not the machete.

I won’t rerun the experience now, or all my learning from it. I will say, though, that the mima team reinforced for me the absolute importance for adaptive resilience of shared purpose, cherished by the people upon whom the today and tomorrow of an organisation rely. When other things fray or change – revenue funding, networks, staffing, ownership of assets etc – this is the difference between future and fracture. But we should never underestimate the effort and stress required.

I worried that an Interim Director role might leave me wanting to get back to ‘a proper big job’ after almost 5 years of Thinking Practice. I’m glad to say it didn’t, and that neither did it make me think I’ve developed so many weird habits, or lost so many skills, I was now unfit for such a position. (That’s not a pitch, by the way.)

Recruitment
One of my favourite Thinking Practices is interviewing people – in relation to research, evaluations and so on. I also enjoy getting involved in recruitment interviews; something I’d done mainly via my board memberships in recent years. But 2014 has brought several fascinating recruitment assignments. These ranged from assisting in selections to helping design job descriptions, target candidates and interview at mima to managing the whole process of finding a successor for Susan Jones at the head of a-n. I was pleased to help get outstanding people in place in those roles. There are lots of generic recruiters around, of course, with more ‘substance’ than Thinking Practice in recruitment. But I can draw on expertise and work with you to design processes that help get the best person. So I’d be very happy to do more of this kind of work in 2015. (That was a bit of a pitch, fair cop.)

Critical Friendship
The ‘Creative People & Places’ schemes across England (CPPs for short) were encouraged, maybe even obliged, to find people to be their ‘Critical Friends’. Critical Friends draw on the skills of coaching and mentoring, but also share frameworks and expertise. I’ve had a really good time the last 18 months or so being the Critical Friend for Bait, the CPP for South East Northumberland. It’s been a good way of developing the coaching approach I’ve trained in and use throughout my work. The folk involved – the staff team and the consortium board – are good people and the work they do is complex and important. I’ve learnt a lot myself, trying to be useful in thinking through what the ambitions of the programme and how it could evidence change.

What’s been helpful is that this is a long-term relationship, working with leadership, team and board over a period of years, just 2-3 days per quarter. It provides external challenge and facilitation, but with less of the jerky-stop-start some consulting relationships can have. (For all parties.) We can build a continuity of conversation over a period of time, moving from individual to team work in a coherent process.

I have a hunch this model, maybe at 3 or 4 days a year, could usefully be adapted to other organisational situations: capital development, change processes or artistic development. If any organisations in the UK were interested in developing a Critical Friend relationship in 2015 I’d be keen to trial some different packages. (Ok, that’s the last pitch, honest.)

Writing
2014 was a good year for my creative writing. New Writing North selected How I Learned to Sing for their Read Regional library promotion, which meant gigs in libraries across Yorkshire and the North East. After one, I was asked to accompany a member of the audience to the cashpoint so urgently did they want to buy the book. To the passer-by it probably looked more like a drug deal than literary culture, but hey ho. At another, in Hull, I met a subscriber to Scratch, the poetry magazine I edited in the 90s, who had brought his copies. Reviews also continued to trickle in. One phrase – ‘one of the finest contemporary love poems’ – is now regularly quoted in our house. You can read more over here, should you be interested.

Also on the poetry side of things, I was happy to help out a bit on the committee that put together the first T-Junction Teesside International Poetry Festival. It brought writers from all over the world to Middlesbrough in October. It was great, even if we sadly had to Skype John Berger in.

I was also commissioned a couple of times. I wrote a poem that will be used on Stockton High Street next year. I mixed poetry and prose for the Tyneside Cinema, after being their ‘conference poet’ at an event about young people and specialized film. The resulting book – ‘6 Degrees of Connection: Towards the Absolute Alrightness of the Kids’ – contained poetry and practical tips on engaging and enabling young people. It also had pages designed like intertitles that gave me a possibly disproportionate pleasure.

2014 also contained a lot of writing/publishing of other sorts. There were co-written papers, evaluation reports, business plans and some long articles such as The F Word for Native, the journal of the Digital R&D Fund. Have a look at the publications page on the website for more details. Lord help me, but I even found myself writing an Grants for the arts interim report for the Swallows Foundation UK (which I chair), when there was no one else available to do it.

I enjoy research – talking to super-engaged artists or leaders, librarians or curators – but I also love finding and ordering the words. And then, maybe most of all, I enjoy editing them. A useful find this year that helps with this has been the Hemingway app. I recommend it. (This blog was much longer to start with, believe it or not.)

Beyond ‘the arts’
2014 has seen a surge of attention from the museums sector to my writing on adaptive resilience. It’s been interesting thinking about how the characteristics of organisations that tend to be adaptive and resilient might vary in the museums sector. The nature of the assets and networks, for instance, is very different. Often small ‘organisations’ have major archives and collection material or a heritage site to care for – and use. The networks of volunteers and supporters also seem to be a different kind of resource than in most arts organisations. Whether size is asset or liability also feels a different question than it often is for arts organisations.

I’ve enjoyed invitations to think about these issues in seminars with museums leaders and at a recent Museums Association conference. I’m interested that museums seem to be putting more emphasis on the personal resilience of leaders than the arts did, at least at first. This connection is one I’ve thought about more and more and something I want to explore more in 2015. (Not least for my own resilience.)

I’ve also been pleased to get back to some work with libraries, including evaluating the Digital War Memorial project. I was never convinced ‘the arts’ benefited from being separate from other bits of culture, or heritage from arts, and have argued that case for many years.

So much more I could have said, but that’s (more than) enough. Thanks to all the clients and collaborators who’ve given me these experiences. Thanks to the fantastic people in the organisations I’m a trustee of, where I’m also always learning. (Swallows Foundation UK, AV Festival and Seven Stories.) It’s really been a great year, which I guess is why it feels as if it’s lasted approximately 12 minutes. Not always easy, full of challenges and frustrations and some anger at the society some are intent on creating/maintaining, but a year full of opportunities to work against the narrow, the bitter, the selfish, the unfair and for a more shared and equal culture.

Editing this, I’m struck how often I’ve used the word enjoyed. This may not be the case in the next set of things I write about. For that I feel both lucky and grateful.